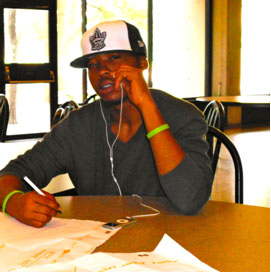 The beginning of secondary school did not go as planned for Tyrone. A combination of factors, including situations outside of school that would be difficult for anyone to endure, got the best of him.

Absences and lates piled up, grades declined, and credits slipped through his fingers.

With most of the close friends that he came into grade 9 with at different schools or not in school at all, motivation to graduate was fading.

When Tyrone was hired as a Mentor for SBL, there were many that questioned whether he was a role model. In that first summer, and in the summers that followed, he thrived in a leadership role. His ability to understand where youth facing difficulties were coming from, his way of presenting options in a way that is not telling you what to do, and the respect he had built with youth in the community made him a fundamental part of the success of SBL. As much as Tyrone was helping others, things got worse before they got better. After a few substantial set-backs, his desire to succeed only grew stronger.

In the past year, he has completed a coop placement with SBL, participated in the completion of 3 short films (one fiction and two documentaries), presented at conferences and forums (as far away as Welland, Ontario), and represented SBL to external stakeholders.

He is now a running a weekly film and photography workshop, he works in SBL as a Senior Mentor, he is a part of The Remix Project, and he is on track to complete secondary school with a goal post-secondary education so that he can continue to work with youth.