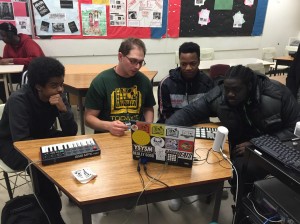 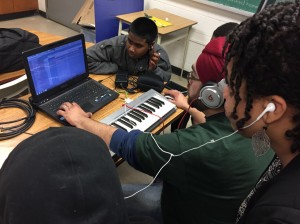 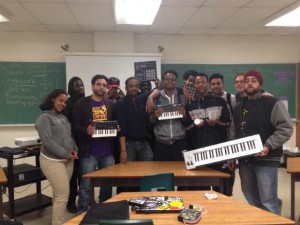 On Wednesday, March 25, as a partner with the TDSB and the Hip Hop STEMposium, we were afforded the opportunity to host Elliot Gann and his team from Today’s Future Sound from Oakland, California who ran a 2 hour beat-making workshop with us.

Over the years we have worked with countless facilitators, but few operated on the level of Elliot Gann and his team.

The students we engaged for the workshop have been students that are always in our space, but rarely interested in any of the programming.  What happened in those two and a half hours was exceptional. The ten students that were a part of the workshop were so immersed and engaged that when our time was up they attempted to negotiate an extension or a second workshop this week. In fact, this negotiation began in the first 20 minutes of the workshop, as it was immediately evident that this experience was on another level. From experience, the youth we had in the space would have been a challenge for anyone who is new to us, as they were definitely feeling him out.  His knowledge of the music and ability to turn their challenges into engagement was remarkable.

“If you are going to teach us how to make beats, we want to see what you’ve done” was one of the challenges presented, and their team quickly got the students respect by sharing their produced work. By the end of the workshop, anyone just walking by would think that this is a group that has been working together for months based on the level of comfort in the room.

A part of what made the experience so powerful was that the students had a lot of room to incorporate their ideas, and really owned the music they were creating.  The facilitators were amazing at supporting the students in fleshing out the type of beat they were looking for even when given vague suggestions.  That could be attributed to deep listening and their extensive knowledge of the music.

One of the dynamics was that youth came in with assumptions that the workshop would be far less engaging based their past experience of “beat making workshops” – and that got blown out of the water.  Despite the initial cynicism, the environment was very supportive and conducive for everyone to learn and produce something they could call their own and walk home with.

By the end of the session, everyone created a beat that they were truly proud of, and the highlight was seeing everyone feeling each beat and showing so much love to their peers.

The true testament to the value of this experience, was in the words of Olando who made it clear that he wants to bump the music he made on his phone because it’s not just a beat he made for the workshop, but something he’d like to hear again on his headphones this time.

The introduction to this approach and the quality of the experience is something we should collaboratively explore on bringing to Toronto.  We have worked with countless organizations that do good work, but not on a level that engages youth that are disinterested in a lot of what’s out there.  This is a model we need to develop here and scale.

Check out the beats they made by clicking the links below: