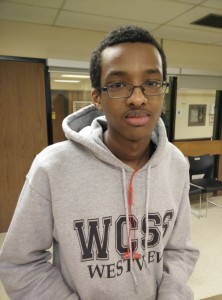 Mohamed Ibrahim is an African Canadian Somali who moved to Toronto about a year and half ago from Calgary to the North west end of the city’s own Jane – Finch. This was where he crossed paths with the Success beyond Limits family through a friend of his who was already an SBL member; invited Mohamed to workout with him through SBL’s after school fitness program where he began attending frequently after-school. Mohamed admits that he initially did not see the immediate benefits of SBL initially. However this changed when he participated in his first 2014 March break Employment and /job readiness program last year getting his chance to interact with SBL staff more, Mohamed came to the conclusion that he could benefit from being around such positive and productive staff, leading to the increasing of his interests in the organization and how he could benefit from it. Since that experience, Mohamed has been a loyal affiliate to SBL, who continues to interact with staff about issues affecting the global community.

Last year he was also connected to the TIFF Next Wave committee through SBL’s vast network of partnerships where he is able to continually grow while increasing his social wealth. As a member of the TIFF Next Wave committee, Mohamed along with eleven other high school students work towards the making of the TIFF Next Wave Festival; a festival geared towards High School students allowing them to immerse themselves with film and their fellow films buffs. This year’s festival was a great success! Mohamed has continued to be present in the space regularly where he enjoys having in depth conversations, tutoring fellow peers, and overall just being someone who is always helpful and willing to support Success Beyond Limits any way he can. Mohamed Ibrahim is also a natural academic who has proven to be a hard worker that is willing to go the extra mile for success as he thrives on venturing new tasks and completing old endeavours.

Challenges around dealing with the negative Westernized perception of Islam are persistent realities that motivate Mohammed to break down barriers created by Western powers as he aspires to attend post-secondary pending in the fall with the hopes of entering Law school after obtaining his Bachelor’s degree. Success beyond Limits respects his ambition to want more for himself and commend his courage to make big dreams.