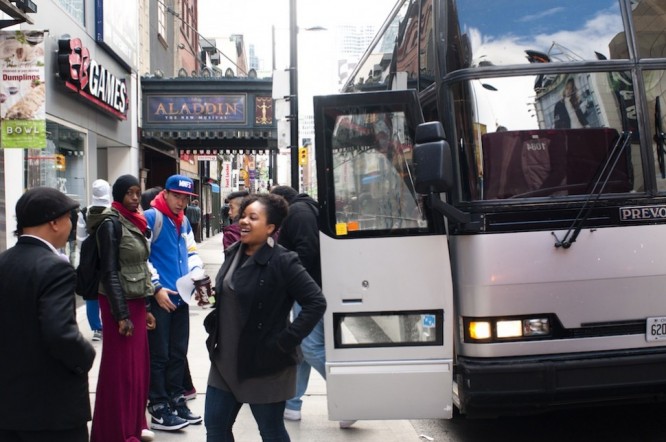 We catch a ride to the city’s biggest community hip-hop fest with a group of youngsters and hear about suburban alienation blues.

Last Sunday afternoon, under grey skies, seagulls swooped overhead while a couple sat in a rusted Honda Civic in the Jane Finch Mall parking lot and ate McDonald’s. Suddenly, an enormous luxury coach bus pulled up alongside a blue dumpster. The bus—chartered by Toronto urban community-building organization Manifesto, in cooperation with city youth-outreach workers—was there to offer young people in priority neighbourhoods a lift to and from the main stage of the Manifesto Festival celebrations downtown. A handful of teenagers trickled in, a few wearing a practiced façade of coolness. The veneer quickly dissolved, though, once they settled in for the long ride and started talking about their ’hood.

The Manifesto Festival, now in its seventh year, began as a grassroots celebration of urban culture. It brings in artists from across the GTA and North America to showcase breakdancing, live graffiti, and hip-hop performance. It was started as a response to growing negativity towards hip-hop, particularly in the wake of 2005’s “year of the gun.” (Around that time, there was an increase in government funding for programs looking to quell incidents of gun violence.)Though the positive vibes of the festival have grown along with its popularity—around 50,000 people came out this year—the spectre of violence is still a real concern for the communities it aims to serve.

The free buses (sponsored by Yahoo!) are difficult to fill, due to “turf wars, both at Jane-Finch and in Scarborough,” said Jade Lee Hoy, one of Manifesto’s original team members. (In fact, no one boarded at the second stop, St. Alban’s Boys and Girls Club.) “People won’t come on if [certain] other people come on, and it depends where you’re picking people up.” Additionally, Hoy said, “[This neighbourhood has] lost two, maybe three young people in the past couple of months due to gun violence in the area. They’re also dealing with [that] trauma.

“For me, it’s just about getting people outside of their neighbourhood,” she added, referring to the “neutral zone” of Yonge-Dundas Square. “Some of them have never even seen the CN Tower. People don’t know what’s in their own city. Some of the acts at the festival are from Jane and Finch [but the kids] don’t know that these rappers and performers are from their neighbourhood.”

Hoy told the teens when the buses would be departing the square in the evening, and gave them advice on what to do at the fest. “Feel free to ask artists questions. They will answer you; they’re very friendly, and I think you guys can learn a lot from your community. Remember that you’re a part of [it] and we really want you to not be afraid to go all in.”

Matthew Alay sat gazing out the window as we raced past strip malls and payday loan shops. The soft-spoken 19-year-old began working as a carpenter a month ago. “I plan on saving and then moving out of Toronto. I’ve been in Toronto my whole life,” he said, citing the shifting social climate as his motivation. “People change. A lot of people get aggressive over nothing. That leads them to gun violence and all that type of bullshit. Personally, I’m trying to get away from that because I grew up watching it. You can only take so much.”

By heading into the heart of downtown, 20-year-old Winston Luc brought a positive view of his home turf to the party. He’s sick of reporters asking about misconceptions of the neighbourhood, saying, “The questions to be asking are: What’s beautiful about Jane and Finch? What do we have that other communities don’t? I feel that we are the heart of diversity. I know that Toronto is diverse, but it gets more colourful when you set foot inside Jane and Finch. You see every race, every religion, every culture, and every ethnicity. The guns and stuff is only a small portion.”

Sariena Luy nodded in agreement. The slight, 14-year-old hip-hop dancer and aspiring photographer was excited for the breakdancing at the festival—this was her first time attending the event. “At Jane and Finch, there are a lot of different opportunities. I’ve been involved with performing, and there are so many great dancers, singers…everything.” Luc leaned over to show me a version of a short music video on his phone. Though it was edited and choreographed by 13-year-olds from the neighbourhood, the skill level was MTV-calibre.

As they dismounted the bus almost two hours after leaving the ’burbs, the bass from the main stage rattled car windows nearby. The group was all grins as they stepped out on the street. “We all go through the same struggle,” said Luc. “But we have a big unity, when we get together there’s always a good vibe. There’s nothing to be afraid of.”