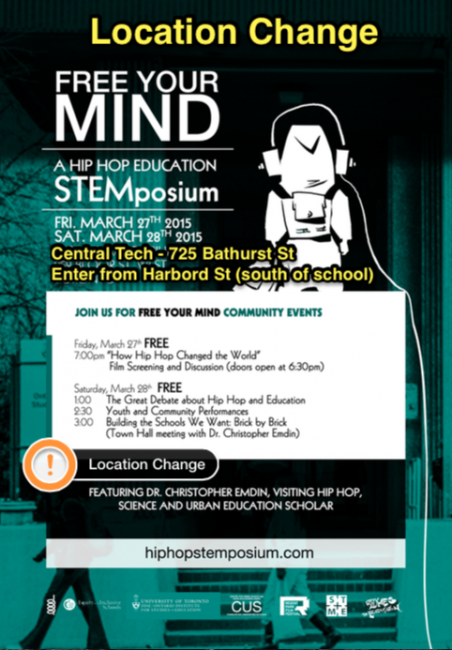 The classroom has long been the exclusive domain of the traditional teacher. Educators, in this traditional sense, have been cast as human repositories of all essential knowledge: as sole experts in the classroom. Outdated teaching methods have been inherited, recycled and modeled by mentor teachers passing this model on to candidates about to begin their journey in the teaching profession. Textboxes and worksheets operate as the primary tools for teaching.

So what does Hip Hop have to do with education, and in particular STEM (Science, Technology, Engineering, and Mathematics)? Dr. Chris Emdin a tenured professor at Columbia University’s Teachers College, in the Department of Mathematics, Science, and Technology shared key characteristics he found in brilliant scientists to demonstrate links between hip hop, education and STEM. He notes brilliant scientists are skeptics, great at observation and analyzing by analogy. He argues the part of the brain that buzzes/lights up when scientists are problem solving in the laboratory is the same part of the brain that is hyperactive when rappers are freestyling (improvisational rhyming). A prime task of his research: to search for brilliant scientists, he shared that those who demonstrate the key characteristics cited above, he finds them in rappers while performing their craft.

Many of the workshops that were part of the Hip Hop STEMposium – put on by Toronto District School Board – made central the key characteristics, creativity, higher order analytical reasoning and critical thinking – to Grades 7-12 TDSB students from across Toronto. SBL staff and mentors facilitated a workshop called ‘Hip Hop Tech.’ The workshop laid out the historical context of the South Bronx in the 1970s and 1980s – a period hallmarked by post-industrialism, “urban renewal”, and de-investment in urban centres  – all of which are significant in the birthing of Hip Hop culture. The lack of resources available to young people during this time played an integral part in the creativity and ingenuity in the birthing of four of the elements of Hip Hop culture – DJing, MCing, Breakdancing, and Graffitti Art.

Highlighting the creative technical innovations ushered in by Hip Hop practitioners, students had the opportunity to learn first hand the basics of DJing, demonstrating the importance of timing and the measurements of beats. As students would look for breaks (moments of instrumentation) to mix, it blended into the next section of the workshop, which was sampling.

Sampling has been a cornerstone of Hip Hop music with prominent records like ‘Rapper’s Delight’ by The Sugar Hill Gang becoming a major hit. As Hip Hop grew in the 1980s, Disco and Funk became part of the backdrop of the music ushering in new technology like the Sampler. This section of the workshop provided students with the opportunity to identify samples and the sampling tracks while analyzing and pinpointing similarities and differences between the two.

The third section of the workshop was focused on Graffiti Art. During the 1980s, the canvas of many young artists were derelict buildings and subway trains. Subway trains traveled through various parts of a city making them the ideal canvas for young people who may not have access to a museum or gallery space to exhibit their art. They had the city and the trains and they made use of them. Students were narrated a time period and setting then presented with the words Hip Hop Tech – creating visual art pieces and signing them with their own graffiti tag.

As our workshop wrapped up and staff and students headed to lunch, a student approached me, she asked, “Does this happen every year?” By this she was referring to the Hip Hop STEMposium. My immediate thought was to say it should, but rather I elected to utter, “This is the first one.” The next words out of her mouth were “I hope these teachers are taking notes and listening. Using music in the classroom makes things more interesting and fun.”  Before heading downstairs for lunch, she was in the hallway teaching her friends Hip Hop dance steps. As I was watching, my colleague approached me and whispered, “She’s a trained classical ballet dancer.” The excitement and enthusiasm the student spoke with, I have witnessed over the years when bringing Hip Hop into the classroom. Young people who are part of SBL have championed for the Hip Hop Literacy Program that has been operating as a core component of our after-school program for the last four years.

The Hip Hop STEMposium was a conference that robustly acknowledged and expanded the ways we define the term educator by inviting Hip Hop practitioners, social activists, teachers, and community workers to demonstrate non-traditional pedagogical methods of engaging young people in their learning. If what we are doing as educators is not working for all students, why continue to do it? Hip Hop based education is not the end all be all answer, but it’s a piece of the puzzle.

successblHip Hop STEMposium: Why Are We Talking About Hip Hop and Education?03.28.2015