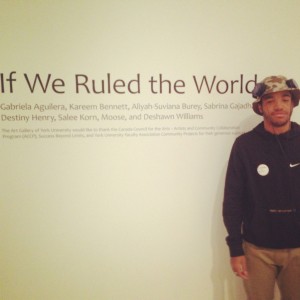 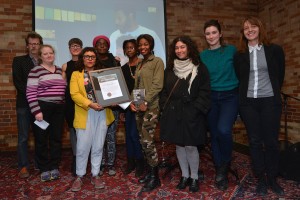 On Wednesday November 5th the Art Gallery of York University (AGYU) and Success Beyond Limits youth were awarded the Ontario Association of Art Galleries 2014 Education Award for If We Ruled the World: Creating an Urban Spatial Imaginary, a multidisciplinary art education program.

Mentored and led by spoken word artists, the M.A.D. Poet (aka Melissa A. Dean), visual artist and graphic designer Mark “Kurupt” Stoddart and emerging filmmaker Chevy X King, the youth engaged in a five-month program where they developed art in the spoken, written and visual form.

If We Ruled the World was a groundbreaking program marking the third year that the AGYU has collaborated with Success Beyond Limits. Through this program, the youth created visual and written artwork that expressed their individual experiences. While the students did a great deal of self-reflection to produce a library of artwork, they collaborated to produce a song entitled “If we ruled the world” where each student illustrated their thoughts on their community, showcasing both it’s beauty and teachings. Students explored their artistic potential while unpacking their ideas of self, their experiences and goals.