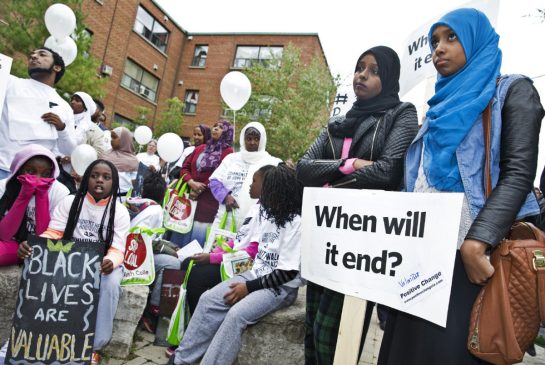 Participants of the Community Walk of Hope for Peace gather Sunday, Sept. 14 during their commemorative walk for slain teacher Abshir Hassan and other victims of gun violence in the Lawrence Heights area.

It has been just over two months since popular school teacher Abshir Hassan walked out of his Lawrence Heights apartment building, moved his car to avoid a ticket, andwas fatally struck by a spray of bullets police say was not intended for him.

Since then, class has resumed at the schools where Hassan, a 31-year-old supply teacher, made an indelible mark. Fall courses have begun at York University, where Hassan had developed a tight-knit group of friends while pursuing a master’s degree in education. His family is trying to move forward.

Still, all wait for answers.

Toronto police continue to investigate the July 8 shooting, which killed Hassan and injured a 22-year-old man and 18-year old woman.

From the beginning, it was clear the bullets were never intended for Hassan. Lead homicide detective Steve Ryan said Hassan was in the wrong place at the wrong time; that is, in part, what’s making the case difficult to crack, he said.

Homicides are difficult to solve “anytime you have such a great disconnect between your victims, and your shooter,” he said.

Witnesses are co-operating, progress is being made, and Ryan is confident there will be an arrest. “But we have nothing concrete as of yet,” he said in a recent interview.

For Hassan’s family, the wait has been difficult. Zak Hassan, Abshir’s 19-year-old brother, said they are doing “a lot better,” trying to stay hopeful the case will be solved.

“It’s life, it’s how it works. Everything will fall into place eventually,” Zak said.

Recent memorial events have been buoying the family. On Sept. 7, friends, colleagues and former students gathered at York University to perform music, poetry and skits in Hassan’s honour. The university also announced they will be presenting Hassan’s family with an honourary Master’s degree.

On Sunday, friends held a memorial walk honouring Hassan and other victims of gun violence in the Lawrence Heights area. Organizers are hoping the event will encourage community members to take action against the gun violence that persists, despite efforts of Hassan and others like him.

While studying to become a teacher, Hassan worked with Beyond 3:30, a program offered at Lawrence Heights Middle School and others in Toronto’s inner-city neighbourhoods. He had also volunteered with Success Beyond Limits, a community-based organization encouraging youth to finish their education.

Following the shooting, David deBelle, principal at Lawrence Heights Middle School, spoke earnestly about its effect, saying the deadly gunfire was simultaneously shocking and unsurprising for his students.

“They’ve seen this all many times before,” he said after Hassan’s funeral, “and chances are they are going to see it again.”

Since school resumed, staff have been closely monitoring students for signs of grief, deBelle said.

There are plans to commemorate Hassan at Lawrence Heights in the spring, likely with a tree-planting ceremony and a commemorative bench. In the meantime, deBelle keeps pictures of Hassan up in his office. Some days, they are difficult to look at.

“It’s still quite raw,” deBelle said. “Some time has passed, but it comes back pretty quickly.”