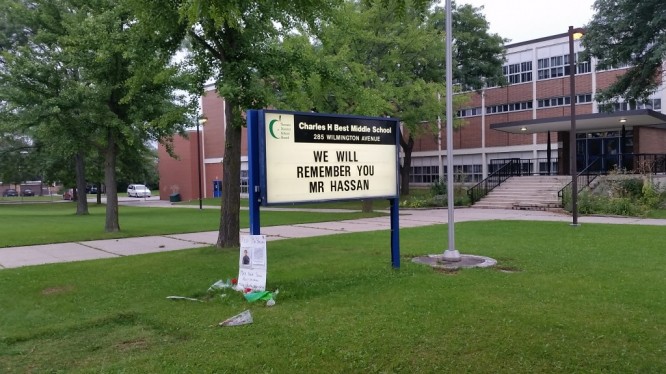 York University MEd student Abshir Hassan (BA ’08, BEd ’11) was known by family, friends and the community as a hard-working and caring individual who was admired for his work with youth in the Lawrence Heights community where he was raised. He was a passionate teacher who wanted to make a difference in his community and in the lives of the children who lived there.

Tragically, Hassan’s life of inspiring community work was cut short when he was fatally shot outside his apartment on July 8 at the age of 31.

“The York community mourns the loss of this gifted teacher and dedicated community leader,” Mamdouh Shoukri, York’s president and vice-chancellor, remarked. “Abshir Hassan was not only a York graduate student and two-time alumnus, but he was the kind of student who embodies the very best of this institution. We extend our sincere condolences to his family, friends, colleagues and fellow students at York.”

Ron Owston, dean of the Faculty of Education, said, “Abshir is fondly remembered by all who came into contact with him as brilliant, loving and passionately committed to social justice. All of us suffer when a member of our community is lost and we want to express our condolences to his family and friends.”

“For me to describe Abshir in words [is] almost next to impossible,” his father Ahmed Hassan shared. “His actions towards people he has met in his short life superseded everything I hoped for in a child.”

He was a role model, leader and mentor who did everything he could to ensure his students—he taught at several local schools, including Lawrence Heights Middle School—worked hard and gave their best effort. He also mentored students as a volunteer in after-school programs with Success Beyond Limits. He made it a point to let his students and the kids in his community know the value of an education and continuous learning. He was a brilliant example of that message through his pursuit of graduate studies at York University.

“Abshir was a curious, committed and engaging graduate student,” Professor Carl James, Hassan’s MEd supervisor, recalls. “He was interested in learning, in exchanging ideas and getting at the heart of the issues that pertain to the low achievement of racialized students—particularly Somalis and other black students. This concern informed much of Abshir’s graduate work, including his thesis, which looked at the complexity of identity. He wished to produce work that challenged the essentialized ways in which Somalis were presented in the media and, as he would say, ‘in the imagination of Westerners who thought that Somalis were unwilling to adapt to these Western societies.’ ”

Professor Nombuso Dlamini, who also worked closely with Hassan, described him as a rising academic star with a wealth of intellectual curiosity. “He was always reading and debating with me about issues of social identity and the way that young African Canadians—what he so fondly referred to as generation 1.5–construct, negotiate and make meaning of their social identities and experiences. He was also interested in knowing how the experiences of young people like him can inform theory and scholarship. He would say, ‘Professor, let’s talk about this transnational identity thing,’ and a long scholarly conversation would begin.”

Hassan is survived by his dad, three younger brothers and a younger sister, all of whom live north of Toronto, as well as his mother and older brother in Somalia.

Celebrating the Life of Abshir Hassan: A Memorial Concert

Through a generous partnership with York University, a memorial concert event will be held in honour of Abshir Hassan on Sept. 7 from 4-8pm at the Tribute Communities Recital Hall in Accolade East Building (Keele campus).

The doors open at 4pm for light refreshments and a reception where those attending can share stories and talk with one another. The performances begin promptly at 5pm, with a short intermission and more performances to follow. Food will be served at 8pm.

Throughout the evening, stories and memories about Abshir’s life, work and volunteerism will be shared with those in attendance, with a slideshow to be shown at the end of the evening.

Tickets to the event cost $10 and can be purchased at the door. This is a benefit concert and all proceeds will be going to preserve Abshir’s legacy.