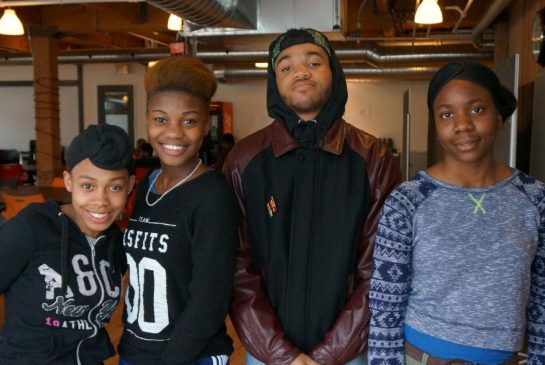 During March Break 2014, youth and staff from Success Beyond Limits had quotes and images that were a part of a few newspaper articles in the Toronto Star and in the Metro Paper.

One of the articles written by Zoe McKnight was titled, “Black Creek neighbourhood deemed Toronto’s least livable” was about the release of the Toronto Strong Neighbourhoods Strategy 2020 ranking system being adopted by the City of Toronto to replace the Priority Neighbourhod designation and the placement of Jane-Finch (aka Black Creek) at the bottom of the 140 neighbourhoods measured.

The second article by Louise Brown was titled, “Future opens wide for Jane-Finch teens at downtown Toronto career camp”, and focused on our March Break Career Exploration program, with links being made to the bigger conversation about the position of Jane and Finch on the ranking.

Within both of the pieces published, powerful voices were shared and a spotlight was placed on some very real issues, yet the conversation also fell into a representation of the realities of life in Jane and Finch that missed the mark in some ways.

The fact is that the Toronto Star is one of the few spaces that have been willing to entertain conversations about coverage that profiles youth in Jane and Finch outside of the tragedies that attract media trucks from every media outlet in our city.  The Toronto Star has also provided extensive coverage of tragedy.  This conversation is not single out the Toronto Star, but it is to find a way to go deeper in the dialogue.

The story here is not youth escaping bleak odds, it is how young leaders in Jane and Finch – who play a major role in the strength of the community – exemplify how rich life and leadership in the community is, despite being failed, decade after decade, by those charged with providing equitable services and infrastructure across Toronto. The tension is that youth in Jane and Finch love living in their community and that this livability ranking does not measure failures of people in the community, they are indicators that point out public systems and institutions that are falling short of providing equitable services.

Consideration needs to be given to the impact of discussing a community that people love living in as the “least livable” without challenging that notion of livability and pointing to those who are actually responsible for the 15 outcomes being measured.

Thought needs to be given to how a community where going for a walk is a great part of day-to-day life is being described as not being “walkable”, which reinforces stereotypes held outside the community of Jane and Finch not being a safe place to walk (which the CBC Crime Map proves is safer than Bay Street).

When we look at a neighbourhood that is scoring low in the area of education (graduation rates) where 60 students from the community packed a sign up sheet for a March Break Career Exploration program that required them to be at the bus stop at 8am each day for their entire week off and got them home around 7pm each day, one thing that is obvious is that this gap has little to do with students in the community.

So how do we talk about a neighbourhood with structural and systemic gaps without making life in the neighbourhood seem so bleak (and making young people in the community the centre of the problems we are discussing)?

In developing the Toronto Youth Equity Strategy the City of Toronto encountered a similar dilemma when talking about terms like “at-risk” to describe the young people that the strategy was being built for, and by.  In the report released to outline the strategy they explain that, “Not only did we find that these labels were often unclear in describing the circumstances that place racialized and low-income youth in positions of vulnerability, but youth have told us repeatedly that these labels further stigmatize and marginalize youth in their communities.”  The report goes on to make their position clear: “Vulnerability is defined by the City of Toronto as a service gap, context or situation, not a characteristic or feature of a person.”

Assets Coming Together for Youth, a youth-engaged research project from the School of Social Work at York University shared powerful findings that punctuated what youth in Jane and Finch involved as researchers with the project uncovered.

One of the findings was categorized as, “Stigma & Production of Negative Discourse” which was explained saying:

“The media portray Jane/Finch as a crime-ridden neighbourhood, and the political label of “priority neighbourhood” also contributes to the negative branding of the community. This relentless stigmatization is a form of violence for youth, many of whom reject depictions of their community as troubled, but who acknowledge the challenges they face. “

Another key finding was that of “Resilient Youth / Weak Systems”, which points out, “(w)hen “systems” fail, individuals are often identified as the problem. However, despite evident systemic barriers, many Jane/Finch youth share the asset of resilience.”

Which brings us full circle.  The most recent conversation about Jane and Finch was sparked by the Strong Neighbourhood Strategy, so let’s return to that.  You can go through the measurements they use, one by one, and follow the line of accountability.  Let’s look at walkability, this is a city planning issue.  Or employment, which is shaped by a combination of investment from government and the private sector, the climate for small businesses, transportation, and the strength of labour to name a few factors.

The pattern that can be found, item after item, is that the ‘score’ in each category leads back to systems and institutions, not young people living in the community.  Systems and institutions are where the deficit exists, and that is where the deficit should be addressed; which can be done simultaneously as we stand beside and celebrate the young leaders in Jane and Finch and throughout the neighbourhoods of our city that make Toronto one of the most ‘livable’ cities in the world.